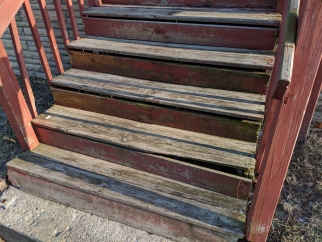 Many low-income families occupy homes and spaces that are in urgent need of costly critical repairs.  These repairs can cause safety and health issues to the family. With financial support from Consumers Energy and Michigan State Housing Development Authority, affiliates in the state of Michigan received funding to partner with these families to assess a home’s defects and deficiencies along with the functional needs of the family.  Those needs are ranked and prioritized by following a critical path, making certain that steps are completed in order of importance and urgency, prioritizing safety, health, and security.

Habitat for Humanity of Mason County is among many of the affiliates that were involved in the Neighborhood Revitalization Program to repair homes in this prioritized fashion. This affiliate soon partnered with a family in dire need of repairs and has shared not only the selection process and need, but also the story of homeowners Gary and Sandy Lange.

Gary and Sandy have owned their home for so long they were not able to determine when they purchased it.  The couple, like most, raised their family in the home and have done what they can over the years to maintain it. On a fixed income, this has been challenging.  Gary is a veteran, as well as a longtime volunteer fireman for the Ludington Fire Department.  In 2016, Gary retired from the fire department after 45 years of service to his community.  The couple have been on the City of Ludington’s code enforcement list for their unsafe and blighted property, but with no available funds for the repairs, the Langes have felt stuck.

The affiliate’s Neighborhood Revitalization committee identified the targeted area and sought applications for repair assistance. Gary was prompt in applying, as well as following up.  Once the committee identified the selected homeowners, Gary was emotional about the news and quite appreciative of the opportunity.  Gary continued to be very flexible and helpful where he could to prepare for the work that would be completed.  The main areas of repair focused on the safety and security of the homeowners and gave the homeowners peace of mind by fixing items that were making them feel stuck and unable to abide by code enforcement.

Gary had acquired some second-hand siding years ago and had been working with a gentleman to have his house sided, as his current siding was in bad shape.  Less than half way through the siding project, the gentleman had major medical issues causing him to leave the job permanently and walking away from an unfinished project.  Unfortunately, the Langes were not able to obtain the needed funds to get the job completed.  The front porch had been a safety concern for years and as the supports continued to fall forward, Gary’s only solution was to add lumber to the gap between the supports and the roof in hopes that it would help hold it up.  At the time of the affiliate’s inspections, the porch supports had fallen so far forward and the footings had deteriorated so much that there was major concern the roof would collapse.  The exterior slider for the rear of their home had a broken seal on the glass, which eventually caused problems seeing out the door. There were also two panels on the slider that had a large gap large enough to allow constant air flow into the home. It wasn’t a surprise when the HERS rater wasn’t able to get a decent reading since the gap was so bad it was like having a window open.  The couple put a space heater by the gap to help keep warm during the winter weather.

In May, Habitat for Humanity of Mason County had nearly 80 volunteers over the course of three days on site to help with the home repairs at Lange’s and their neighbor’s home.  “To me it’s a miracle,” Lange said of the help he received from Habitat for Humanity of Mason County. “I kept asking for help to get this stuff done and the only help you get is like this,” he said, with his hands clasped together as if in prayer.  “These people are helping people the same way I was trying to help them,” he said. “I guess it’s the payback. You don’t look for this when you do that kind of stuff, but it just kind of comes out of nowhere.”

As the home repair projects came to completion, the Langes were left with a safe, secure, and comfortable home that is sure to save them money on their energy bills.  The pride they now have for their home shines through with the flowers covering the new porch and the constant attention to cleaning their new rear slider.  This impact has a huge lasting effect on the homeowners, the volunteers, and the neighborhood.

If you are interested in learning more about the Priority Home Repair Program, please contact your local Habitat for Humanity affiliate.