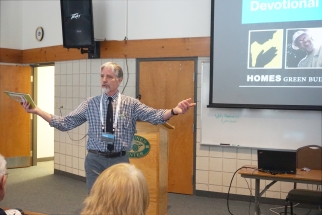 Home building was not an intentional occupational choice for me. In 1979, jobs were sparse for college graduates with a Bachelor of Science degree in Environmental Studies. So I spend a few years truck farming organic crops, which proved to be an exercise in frugality. Then I returned to college to acquire a teaching degree, which might have netted better results if I had been willing to relocate to distant places where few prospective teachers would choose to go.

With a serious need for cash, I accepted the first job offer that came my way. I became a carpenter on a homebuilding crew. I met all the requirements, which is to say I had a pulse. Less than a year later I decided I was ready to hang out my own shingle. I obtained my residential builder license and was off on my own.

Work was plentiful, reasonably profitable, and included a few Frank Lloyd Wright home restorations. Joining the local Home Builders Association came with a T-shirt and the monthly opportunity to relish beer and mostaccioli with other builders. The HBA partnered with the local Kalamazoo Habitat affiliate to build a house every year. The “Fast Built” house required months of planning. Construction would begin at 7 a.m. on a Thursday morning and the certificate of occupancy was usually issued by 8 a.m. the next day. Hundreds of professional volunteers stopped by at precise times to take the home from foundation to finished home in about 24 hours, including landscaping. And everybody got a T-shirt.

I participated for many years and therefore accumulated many T-shirts. By 2003, a chronic case of Habititus inflamed an impulse to apply for an open Habitat construction manager position. I figured I could keep my business going and return to it full time after a year or so. During the job interview I described a vision of Habitat becoming leaders in high quality, high performance homes. This prospect did not appear to be on their radar just yet, but the job was mine.

It turned out that nearly every Habitat project came with a T-shirt. Like the Fast Built house, they were imprinted with the then-unique affiliate’s logo as well as those of many sponsors. The more involved I became, the more T-shirts I acquired. When my one-year, self-imposed commitment approached, I closed my business and embarked on a long, fortuitous career with Habitat.

Those T-shirts continued to pile up, despite donating them by the cubic yard. As Habitat branding became standardized, the unique affiliate logos disappeared, yet the T-shirts kept on coming. When I got to Habitat Michigan the quality of the shirts had improved considerably. Some even had collars.

After retiring on June 30th of this year, I will have to volunteer again in order to be rewarded with a snazzy T-shirt. It has been my serendipitous honor and pleasure to serve in the mission of Habitat alongside all of you and those who preceded most of you. I cannot imagine a more rewarding and fulfilling career. I wish you all the best and plenty of T-shirts as you pursue your own Habitat dreams and goals. As for me, perhaps AARP, Medicare, or the local senior center will offer T-shirts once in a while.